The Countries that Pay the Most and Least for LEGO

This article was originally published on TheToyZone

Click here to see the world map in full size

LEGO is the world in miniature. From kid-sized construction projects to brick-by-brick replicas of cinematic universes, LEGO offers a way for little hands to get a grip on the world.

But LEGO also tells a tiny tale about world economics. The price of Lego differs depending on the country where you shop. In fact, TheToyZone found a 700% difference between the average price of LEGO in the most and least expensive markets.

We used a Virtual Private Network (VPN) service to go Google Shopping in every country where new LEGO sets are sold, and totalled up the average price of eight leading LEGO sets for each territory. Then we converted our findings to US dollars and created a new set of LEGO-inspired maps to illustrate which countries pay more for their LEGO.

Scroll on to see where your country features overall – and how prices fluctuate for different LEGO Special Editions. 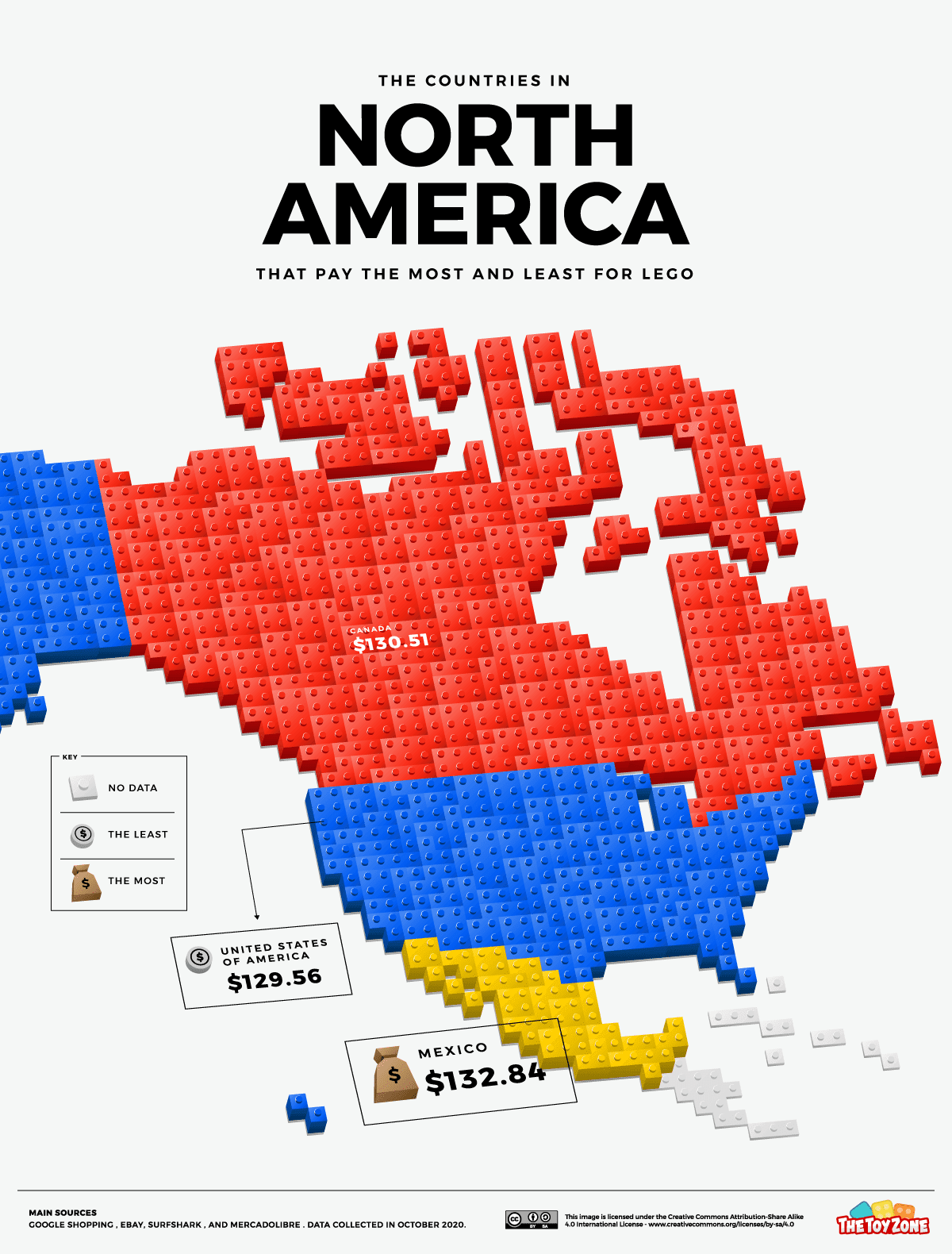 Once upon a time, the United States was one of the cheapest places to buy LEGO. “Our selling costs in Europe and Asia are higher than in the US because of the size of the US market and retailers (economies of scale),” LEGO’s Corporate Management told a LEGO blogger in 2008. “Furthermore, the US market is by far the most price competitive in the world.”

However, the flattening of international markets means that American prices have caught up with many other territories. And Mexico has become a cheap place in North America to buy new LEGO, not least because of the LEGO factory in Juaréz. 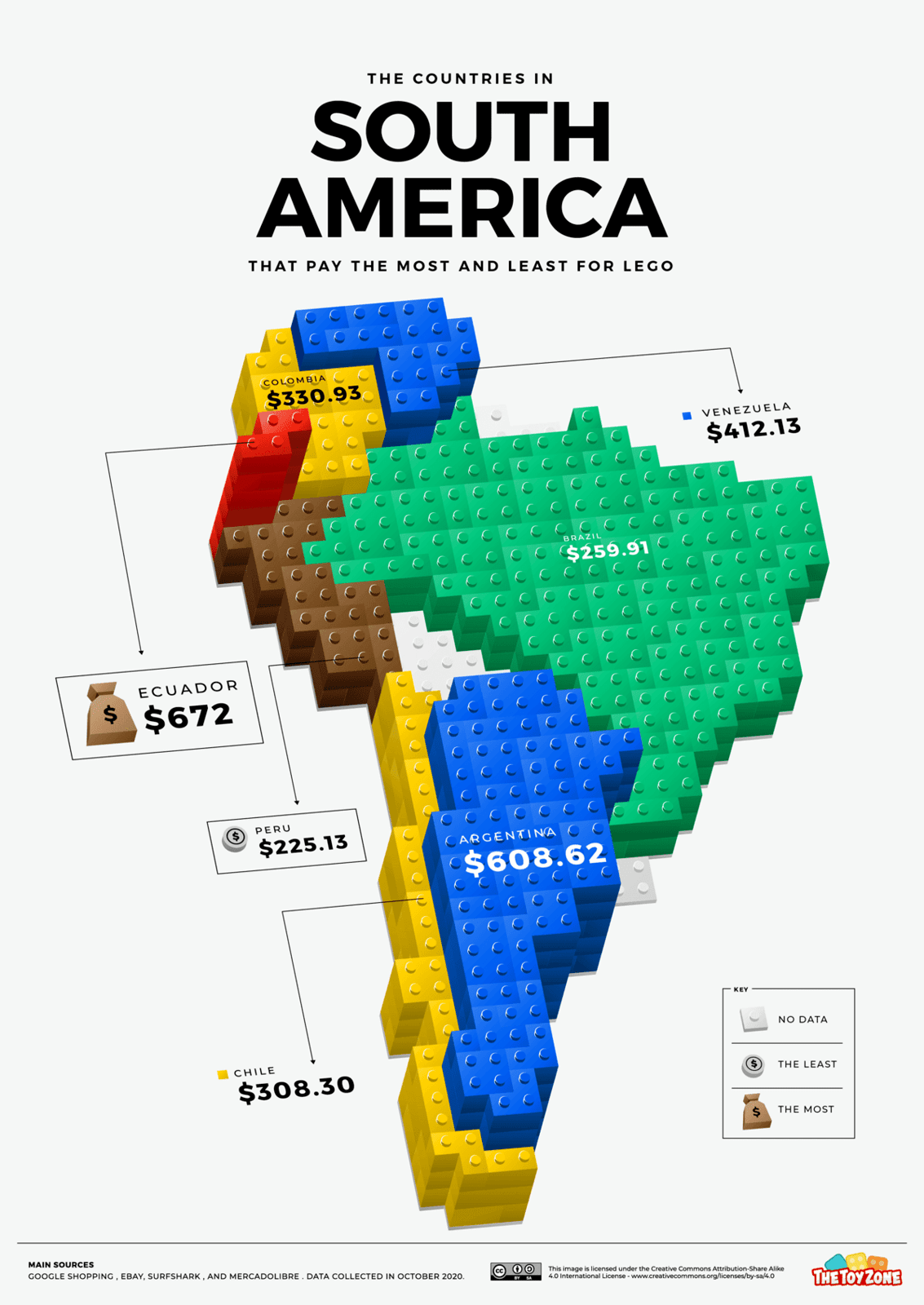 South American LEGO prices vary significantly from country to country. The cheapest place to get a set is Venezuela. But the average price in Peru ($225.13) is still much higher than that of the US, and several of the sets in our study were unavailable to purchase.

Ecuador has the highest average LEGO price in South America. However, we had to base that figure on the only set we could find to buy: the Lego Boost Creative Toolbox, which costs $672.00 (against $183.93 in the US and $125.97 in the UK, for example). 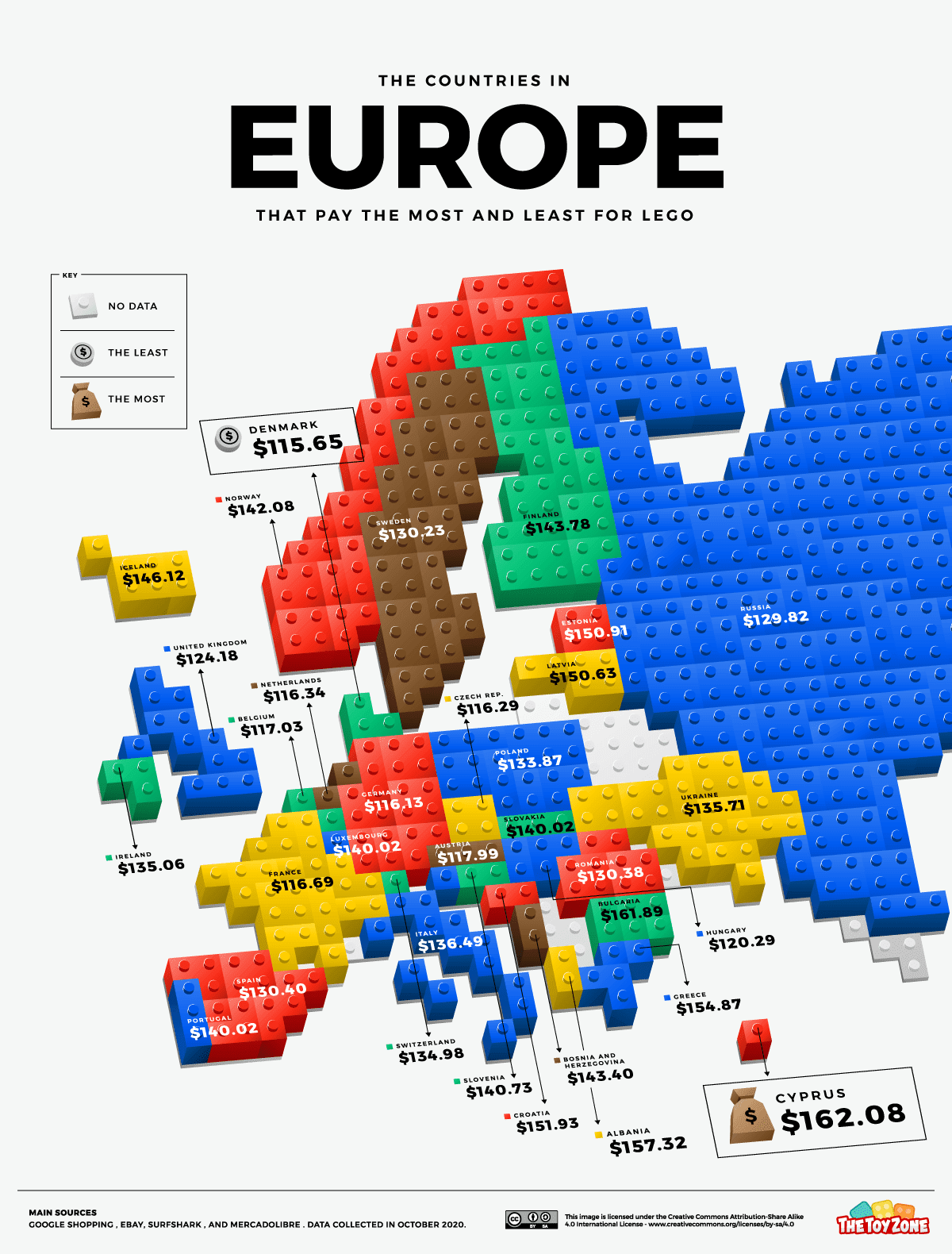 Denmark is the birthplace of LEGO. So, while most  living costs in Denmark are high compared to the rest of the world LEGO remains mostly affordable (yes, LEGO is a living cost). Reasonable prices and no surprises across the sets in our study make Denmark the cheapest place in Europe to get your bricks. (You can also find lots of exclusive LEGO swag at the LEGO House Store in Billund among other Danish outlets.)

In fact, LEGO prices are pretty steady across Europe, although prices tend to get steep the further east you go. That said, the rest of Scandinavia prices its LEGO significantly higher than Denmark. Cyprus has the highest average cost in Europe, with an average price of $162.08 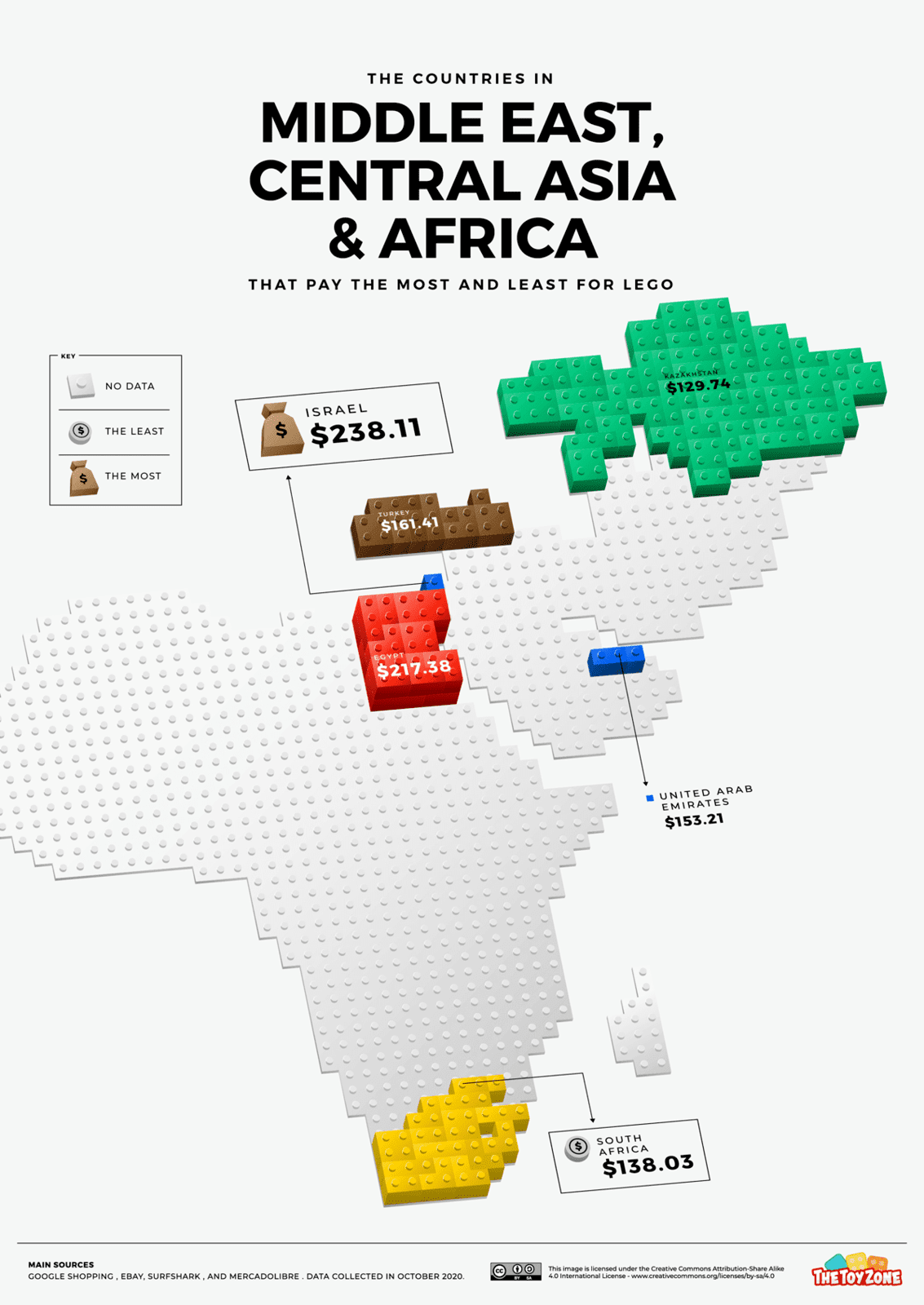 Kazakhstan is just about the cheapest country for LEGO in these regions. Prices are reasonable for all the sets in our study, evening out at an average of $129.74. UAE is pushed into second place due to an eye-watering $274.47 Boost Creative Toolbox.

Israel is the regional location with the broadest availability of the sets in our study. However, it is also the most expensive, with an average of $238.11 per set. Israel claimed the world’s largest LEGO tower in 2017, when thousands of volunteers used over half a million bricks to build a memorial to a young cancer victim.

The only African country where LEGO is officially available is South Africa. LEGO launched its store in Sandton City in 2018. Despite the novelty, prices in South Africa are not unreasonable. TheToyZone calculated an average cost of $138.03 across the sets in our study – although more expensive collector sets are available for those who seek them. 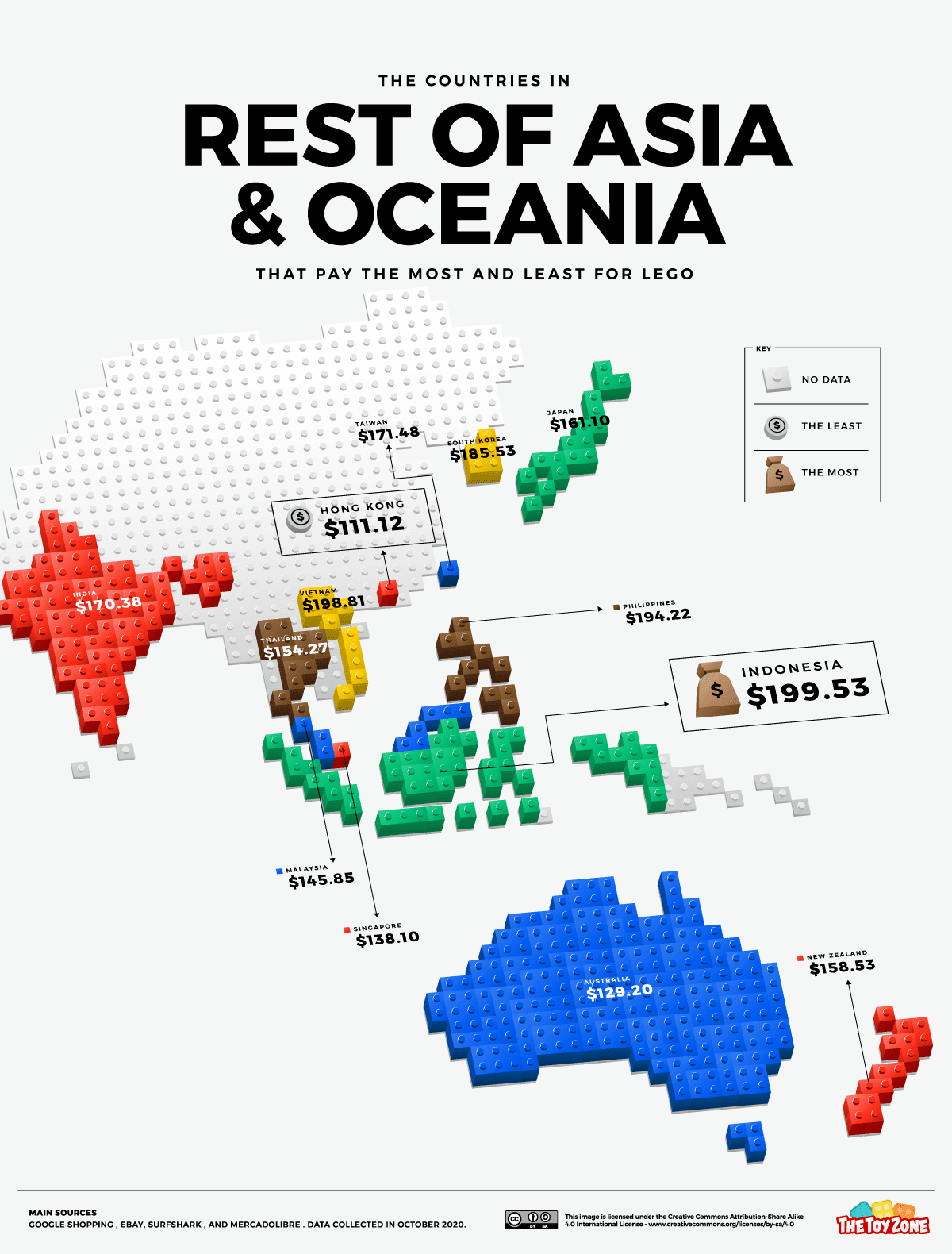 LEGO is very affordable across this region. In fact, Hong Kong is the cheapest LEGO market in the world – the LEGO factory in neighboring China produces 80% of Asia’s bricks. There are also lots of niche and megastore outlets in Hong Kong, meaning that sellers need to keep their prices competitive.

Our priciest find in this region is Indonesia. Several of the sets in our study were the wrong side of 200 bucks, but a reasonably priced Classic Large Creative Brick Box and Friends Central Perk Set brought the average price back down to $199.53.

How LEGO Special Editions Are Priced Differently Around the World

Our final set of maps does away with the average prices and looks at the cost of each individual Special Edition set around the world. Scroll right to see the relative cost of LEGO editions such as Disney Frozen 2 Arendelle Castle or Creator Ford Mustang.

These variations are mostly dictated by the availability of different Special Editions in each location. Vendors must also take the local popularity of each franchise into account. As well as being absolutely lovely (even if we do say so ourselves), this last series of maps shows that it is worth checking out the local LEGO market when you travel if there is a particular Special Edition you covet.

LEGO may not be the cheapest toy to collect but, just like real buildings, it can be an investment. A half-reconstructed ROTJ Death Star bought in 2005 could get you $2,738 now (or around half that if you’ve played with it).

If you plan to share your LEGO with your kids, it is also an investment in them. LEGO can boost children’s spatial skills and their STEM prospects, as well as being a workout for the imagination.

And with the LEGO manufacturers seriously developing sustainable alternatives to the traditional plastic brick, and promising not just a neutral but positive impact on the planet, you could even be investing in Earth’s future: keeping the planet operational for long enough to see Junior’s early brick experiments made real!

To determine the costs of individual LEGO sets in specific countries, we first utilized a Virtual Private Network (VPN) service, Surfshark, to log into a virtual server in each of the countries listed. This way, when we searched for the item in Google Shopping, data local to that country was populated into the search, rather than from our researchers’ locations in the USA and Great Britain.

Currencies and exchange rates were all determined through XE.com, in October 2020. Sales tax rates for applicable countries were collected from tradingeconomics.com. All final prices are listed in USD.

Shipping costs are not included in the final price. Google Shopping was primarily used to find prices for new units of each LEGO set; in regions where Google Shopping wasn’t available, we searched for either official LEGO sellers, or for other well-established sales platforms (for example, in Central and South America, the online marketplace MercadoLibre.com was used).

The data we collected and used to make these maps can be viewed in full at bit.ly/LEGOPricesMapped